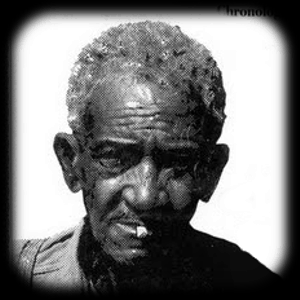 Bo Carter was Delta Bluesman of rare distinction and originality. His skill as a guitarist saw him playing his intricate riffs in a variety of keys and tunings and his bawdy songs, dripping with sexual innuendo, made him one of the best selling country Blues artists of the 30s. With his family band, the Mississippi Sheiks, he took Blues music across the ‘race line’ in the segregated South, but retired before the Folk/Blues revival of the late 50s could expose his talents to the world.

Bo was born Arminter Chatmon in Bolton MS in 1892, the son of an emancipated slave. His father played the fiddle and his mother played guitar, and they encouraged their children to take up instruments. In the mid-20s, the boys formed a string band: Lonnie played fiddle and both Arminter and Sam were multi-instrumentalists, with guitar, mandolin, bass, banjo, harp and clarinet in their repertoire. With guitarist and singer Walter Vinson joining in 1928, they performed as The Mississippi Sheiks, named after the Rudolph Valentino movie, playing dance music and ragtime tunes as well as the Blues. They were a popular act at dances and parties with both black and white crowds, although Jim Crow laws meant audiences were never integrated.

‘Your Biscuits are Big Enough for Me’ is a typical Bo Carter hokum Blues;

In the late 20s, Arminter began to go blind, but his superior guitar skills meant he was offered the chance to make some recordings. Chosing the name Bo Carter, he was the first artist to record the classic Blues ‘Corinne, Corinne’ in 1928, but he soon began specialising in bawdy ‘hokum’ Blues like ‘Banana in Your Fruit Basket’, ‘Ramrod Daddy’ and ‘Your Biscuits are Big Enough for Me’. Bo was more than a one-trick-pony: with a dextrous and versatile guitar style and a pleasant voice, he cut over 100 solo tracks over a ten year period, and was one of the best-selling Blues artists of the day. His brother Sam Chatmon also had a solo career, but both recorded with The Sheiks too, and the band recorded about 80 tracks before they fell from favour in the mid 30s. One of The Sheiks earliest songs, ‘Sitting on Top of the World’, was a hit for them in 1930 and went on to become a Blues standard.

Bo could play some hard Blues too. This is his song, ‘Old Devil’;

Bo Carter Discography
14 tracks of utter filth, or some of the funniest songs about joyful sex you’ll ever hear, depending on your point of view. Parental Advisory!!!


Bo continued recording until 1938, when he returned to the life of a blind street singer and he moved to Memphis in about 1940, dropping out of music soon afterwards. Unlike his brother Sam, who recorded for Arhoolie in 1960 and enjoyed two decades on the club and Festival circuit, Bo never performed again and passed away in Memphis in 1964.
← NAPPY BROWNRAY CHARLES →