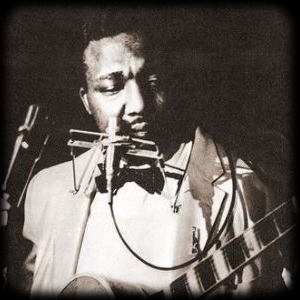 J B Lenior was a uniquely talented musician. Born in Mississippi and surrounded by the Blues from an early age, he often used African polyrhythms which he would beat out on the sound-box of his guitar as he played his delicate Blues. His high, sweet voice and his taste in stage costume might have made him a Soul superstar, but his incisive, political songwriting cut him out of the mainstream, and his needless death robbed us of a great talent.

In 1929, J B (his full given name) was born in Monticello MS and took after his guitar-playing father in studying the work of Blind Lemon Jefferson. As a teenager J B went to New Orleans where it is said he played his rhythm-heavy boogies with Rice ‘Sonny Boy II’ Miller and Elmore James. By 1949 he had made his way to Chicago where Big Bill Broonzy introduced him to the club scene, and his talents allowed him to play with Muddy Waters, Memphis Minnie and Big Maceo. He got a record deal with JOB in 1950, and some of his early sessions, featuring Sunnyland Slim and Leroy Foster, were leased to Chess. The political content of ‘Korea Blues’ and ‘Deep in the Department Blues’ didn’t stop them selling well. J B’s ‘Eisenhower Blues’ of 1954, however, had to be re-jigged by Al Benson’s Parrot label, and re-issued as ‘Tax Paying Blues’ to save offence. Later that year, J B cut his most enduring song ‘ Mama, Talk to Your Daughter’, which was covered many times and led to several follow-up records.

J B’s humorous side came out with ‘Don’t Touch My Head!’ about his ‘process’ hair-do and he also developed a penchant for fancy stage clothes including a fabulous tiger-striped tail coat!

‘I Feel So Good’ features that tail-coat!

J B switched labels a few times as the decade turned, and he began to lace his boogie style with more complex African rhythms and he was billed as ‘J B Lenoir and his African Hunch Rhythm’ on the USA label. The American Blues Festivals were gathering momentum in Europe in the mid-60s and promoter Horst Lippman arranged for J B to record a couple of acoustic albums in Chicago, supervised by Willie Dixon. These sessions left J B free to express himself, and he grabbed the chance with songs like ‘Alabama March’ and ‘Shot on James Meredith’ about a Civil Rights campaigner, and ‘Vietnam Blues’ before the anti-War movement had even got properly started.

J B Lenior Discography
This album combines JB’s last two albums, recorded with Willie Dixon. The sparse, African inspired Blues here is unlike anything you will have heard before.


Tapping out cross-rhythms on his guitar while fingerpicking and playing slide, J B’s fine sweet voice showed an artist at the peak of his powers. Late in 1966, J B moved to down-state Illinois and a few months later he was involved in an automobile accident. He was discharged from the hospital without proper care and he died three weeks later from an injury-related heart attack.