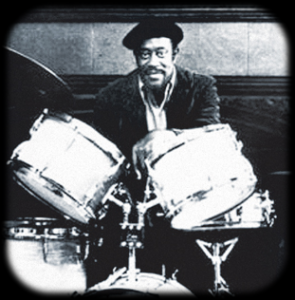 ‘Drums….Fred Below’ was one of those credits that seemed to turn up on almost every album sleeve on those classic days of Chicago Blues. His swinging shuffles could be heard behind the full roster of Blues Legends as he pulled off his special trick of keeping “a Blues beat with a Jazz feel”. Always in demand for session work, Fred played in the Chess house-band for many years and as well as his distinctive Blues ‘backbeat’, he played on a lot of Rock’n’Roll, jazz and R&B records too.

Fred was born in Chicago in 1926, and knew he wanted to be a drummer from an early age. He completed his education at the Roy C Knapp School of Percussion, where he was much influenced by the explosive jazz styles of Buddy Rich, Gene Krupa and Chick Webb, but soon after graduating, he was drafted into WWII, and Fred served again in the 427th Army Band from 1948-1950. When he got home to Chicago, he joined up with Louis and Dave Myers on bass and guitar, and a young harp player called Junior Wells. They had been playing local parties as The Three Deuces, but when Fred joined they became The Aces and quickly made a reputation as one of the hottest live bands on the club circuit. When Muddy Waters‘ harp player Little Walter had a solo hit with ‘Juke’ in 1952, he needed a hot band, so he recruited The Aces, changed their name to The Jukes, and Junior took up the harp spot in Muddy’s band. After three years of hard touring with the tempestuous Walter, Fred was offered a place in Chess Records house-band, where he joined up with Willie Dixon, Otis Spann, Jimmy Rogers, and a host of top musicians as Leonard Chess made his label the home of Chicago Blues.

Fred’s swinging backbeat was at the heart of a long string of classic Blues tracks by Muddy, Willie, Rice ‘Sonny Boy II’ Miller, Howlin’ Wolf, Elmore James, Otis Rush, Buddy Guy, Jimmy Reed, John Brim and many more. As Rock’n’Roll took off, Fred powered the records of Chuck Berry, Bo Diddley and others, and his refined and elegant style adapted to the R&B of Dinah Washington, The Moonglows and The Platters. He was in such massive demand as a session player, his Chess catalogue is only part of his prolific output. Fred was a great stylist on the drums, using ride cymbals, tom-tom fills and a wood block to provide subtle, exciting and innovative rhythms behind almost any kind of music. The Aces re-formed in 1970 to tour Europe with The American Blues Festival, and Fred was a frequent member of various All-Star combos that celebrated the golden years of Chicago Blues. Sadly, Fred was diagnosed with cancer in the 80s and passed away in Chicago aged 61.